The paper "Elastic properties and hardness values of V2AlC and Cr2AlC single crystals" has been published in Physical Review Materials. 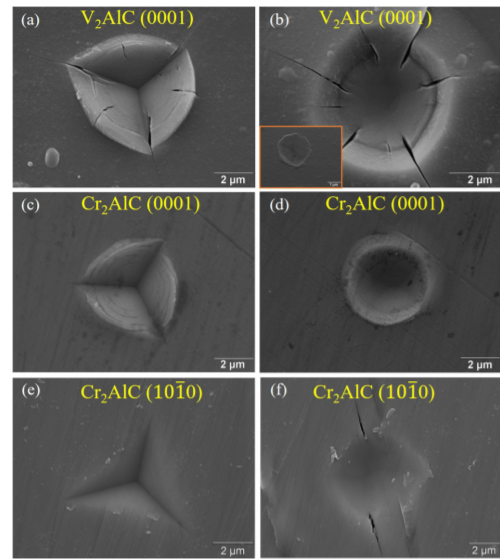 Here you will find the paper by Thierry Ouisse
" Herein we report on a subset of the elastic constants, cij, and hardness values of V2AlC and Cr2AlC single crystals by means of microindentation/nanoindentation techniques. Density functional theory (DFT) is also used to calculate the elastic constants. The c33 and c11 values determined using a Berkovich tip and those calculated by DFT are all found to fall in the relatively narrow range of 320–350 GPa. These results confirm once again that many of MAX phases are relatively elastically isotropic, especially when compared to many other known layered solids such as graphite and mica. Similarly, the hardness values, obtained using Vickers, Berkovich, and a 5 µm spherical tip on the two orthogonal Cr2AlC surfaces, are quite comparable and average 9.0 ± 1 GPa. In all cases, the hardness values are at most 20% higher when the basal planes are loaded along [0001] than when they are loaded edge-on. The Cr2AlC surfaces record an average microyielding stress of 2.7 ± 0.3 GPa, while the less defective V2AlC crystals linearly sustain stresses of the order of 20 GPa, after which, in approximately 60% of the cases, pop-ins, some of which are substantial, are recorded. Postindentation scanning electron microscope micrographs clearly evidence the plastic anisotropy of these crystals. Large pileups near the indent edges and delamination cracks after loading along the [0001] and [10¯10] directions, respectively, are consistent with deformation by ripplocations and ripplocation boundaries, as are the fully and spontaneously recoverable hysteresis stress-strain loops."
A+Augmenter la taille du texteA-Réduire la taille du texteImprimer le documentEnvoyer cette page par mail Partagez cet article Facebook Twitter Linked In