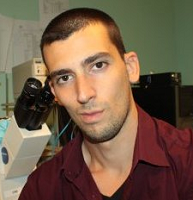 
Abstract
The folding and stability of proteins depend on the physico-chemical conditions of their environment. Especially pH, temperature, stirring and interactions with other macromolecules or with interfaces (liquid-material surfaces; air-liquid; etc.) are known to induce protein denaturation and aggregation phenomena.
The control of therapeutic protein stability represents a medical and economic challenge for the pharmaceutic industry. For instance insulin, which is the most s model produced therapeutic protein, is known to form amyloid aggregates in vitro induced by hydrophobic surfaces. Amyloid aggregates are also involved in several pathologies including human and animal diseases of high economic and public health impact.
This thesis focuses on amyloid aggregation at material surfaces using insulin as a model protein. Previous work from our team have demonstrated that short peptides have the ability to significantly interfere with the kinetics of surface-driven amyloid aggregation and this at sub-stoichiometric concentrations with respect to insulin. In particular peptides adopting a beta-sheet secondary structure when adsorbed on hydrophobic surfaces, were able to reduce the nucleation time of insulin aggregation.
In the present work we have discovered peptide sequences presenting, again at sub-stoichiometric concentrations, two antagonistic effects on insulin aggregation kinetics. The first consists in a cooperative reduction of the nucleation time and operates via peptides bound to the material surface. The second, on the other hand, results in a powerful inhibition of both nucleation and fiber elongation via peptides remaining in solution.
We have first quantitatively characterized these effects on a set of peptides presenting alternate primary sequences of the type (LK)nL, and investigated the underlying mechanisms promoting insulin nucleation. Quantitative fluorescence measurements (Thioflavin T, fluorescent labelling of the peptide) have shown that the cooperative adsorption of peptides on hydrophobic material surfaces was responsible for the reduction of the insulin nucleation time. We have then shown that the inhibitory effect results from the binding of peptides in solution to fibrillar insulin aggregates and that this effect is mediated by charges.
In addition we studied the localization of the insulin nucleation and of the appearance of the first aggregates using fluorescence microscopy. We observed the preferential appearance of the first ThT positive aggregates at the solid-liquid-air triple interface undergoing high shear stress, making these regions the predominant nucleation sites.
We eventually developed a technique allowing a localized and patterned growth of light-induced insulin aggregates on glass surfaces. This atypical aggregation pathway does not present any observable lag time and depends strictly on Thioflavin T. We have shown that the ThT inserted between the cross beta-sheets and which can be excited at 440 nm locally provides the energy required for the conformational transition of the native insulin into the aggregated one. This method can be used to obtain a differential amyloid growth between surface area of different hydrophobicity.