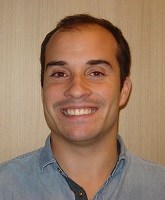 Abstract
The lack of a successful p-type semiconductor oxides delays the future implementation of transparent electronics and oxide-based photovoltaic devices. In the group semiconducting compounds, copper-based oxides present promising electrical, optical and manufacturing features that establish this family of materials suitable for p-type semiconductor applications. In this work, we focused on the growth of cation doped Cu2O and intrinsic CuCrO2 thin films, aiming for enhancements of their optical and electrical response. Furthermore, we implemented these oxide films into pn junction devices, such as solar cells and UV photodetectors.
In the work on Cu2O, we achieved the incorporation of magnesium up to 17% in thin films by aerosol-assisted chemical vapor deposition, resulting in morphology changes. Electrical resistivity was reduced down to values as low as 6.6 ohm.cm, due to the increase of charge-carrier density up to 1018 cm-3. The incorporation of magnesium had additionally an impact on the stability of the Cu2O phase. The transformation of Cu2O into CuO under oxidizing conditions is significantly postponed by the presence of Mg in the films, due to the inhibition of copper split vacancies formation. The integration into pn junctions was successfully achieved using only chemical vapor deposition routes, in combination with n-type ZnO. Nevertheless, the application of Mg-doped Cu2O in solar cells present a meager photovoltaic performance, far from the state-of-the-art reports.
In the work on CuCrO2, we demonstrate the first fabrication of ZnO/CuCrO2 core-shell nanowire heterostructures using low-cost, surface scalable, easily implemented chemical deposition techniques at moderate temperatures, and their integration into self-powered UV photodetectors. A conformal CuCrO2 shell with the delafossite phase and with high uniformity is formed by aerosol-assisted chemical vapor deposition over an array of vertically aligned ZnO nanowires grown by chemical bath deposition. The ZnO/CuCrO2 core-shell nanowire heterostructures present a significant rectifying behavior, with a maximum rectification ratio of 5500 at ±1V, which is much better than similar 2D devices, as well as a high absorption above 85% in the UV region. When applied as self-powered UV photodetectors, the optimized heterojunctions exhibit a maximum responsivity of 187 µA/W under zero bias at 374 nm as well as a high selectivity with a UV-to-visible (374-550 nm) rejection ratio of 68 under an irradiance of 100 mW.cm-2.